Total Joint Arthroplasty (TJA) is one of the most reliable and in-demand orthopaedic procedures with over 1 million cases performed annually in the United States alone. By 2030, this number is expected to reach 2-4 million. This sharp upward trend is primarily driven by an aging of the population with longer life expectancies. 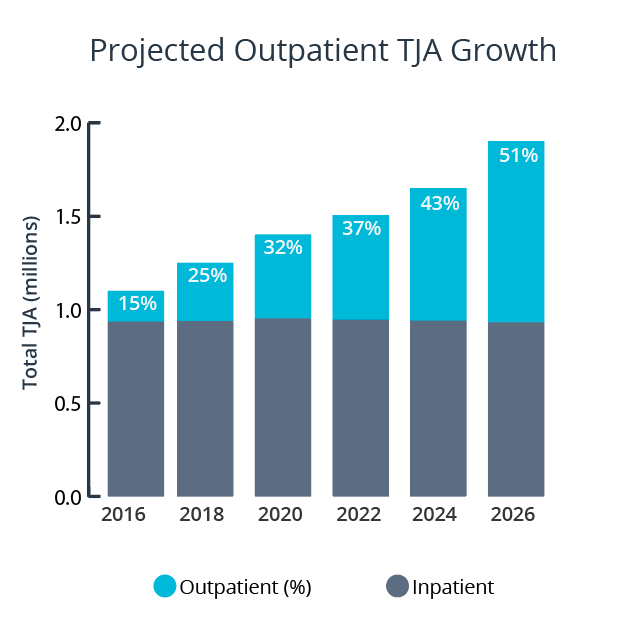 Luckily, clinical advancements are keeping up with the demand. Since its introduction in the 1960’s, TJA has become safer, more efficient, and more cost effective. In particular, minimally invasive and anterior approaches have shown to minimize postoperative pain and help patients recover faster.

With the development of new surgical techniques and rapid recovery protocols as well as the CMS’s proposal to provide coverage for TJA in outpatient settings, there has been an increasing trend towards same-day discharge TJA.

According to the Ambulatory Surgery Center Association, more than 200 ambulatory surgical centers (ASC) across the US perform outpatient TJAs. Hospitals are also shifting toward outpatient TJA in order to compete with the growing number of ASCs.

There are three main drivers contributing to the shift towards the outpatient delivery model:

1) Reduced costs for both patients and providers

According to Dr. Roy Davidovitch, Director of Hip Center at NYU Langone Medical Center, recovering at home not only adds convenience but also brings physical and psychological benefits that can boost patient’s recovery. Dr. William Hozack, Director of Joint Replacement at Thomas Jefferson University Hospital, shares this view in his recent study about in-home recovery, commenting that, “Patients were generally happy and content in the comfort of their own home during recovery.”

Outpatient TJA offers reduced risk for hospital-acquired infection, which is one of the top causes of arthroplasty failure and need for revision. Currently, peri-prosthetic joint infection (PJI) rates for TKA and THA are approximately 0.3-0.6% and 1%, respectively. Although it may not seem high, it is still considered one of the most challenging complications following TJA, resulting in a burden on both patients and providers.

According to Solarino et al., prevention should be the first and best strategy. Minimizing the duration of hospitalization would significantly reduce the risk of infection and further hospitalization.

While the future of outpatient TJA seems promising, there are still concerns regarding its safety and pain management. One of the biggest criticisms is the possibility of uncommon yet fetal postoperative conditions including deep vein thrombosis (DVT) and pulmonary embolism (PE).

However, these side effects could be avoided if high risk patients are properly identified preoperatively. At NYU Langone, Dr. Davidovitch and his team are using a comprehensive protocol that they developed with the anesthesiology, nursing and physical therapy departments. His team is also using technology to track patient progress and stay connected throughout patient recovery.

This migration will continue. It’s something of a no-brainer, for qualified patients same-day discharge provides quality care at lower costs.

Last month, the American Academy of Hip and Knee Surgeons held the first night of their annual Spring meeting. The...
Continue Reading

2020 Outlook: Three Trends to Watch and Quick Tips to Get Ahead

As healthcare welcomes in the new decade, leaders are prioritizing reinvestment in orthopedics and other key service lines to scale...
Continue Reading

Metrics for Evidence-Based Practice is a Must

By now, it’s easy to see that there are health-related concerns that demand our full attention. Under traditional fee for...
Continue Reading